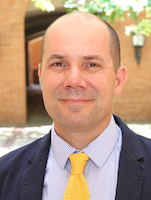 Dr. Raines received his doctorate in mathematics from Oxford University where he was a member of St. Edmund's Hall. He travels extensively to work with collaborators in the UK, Italy, Croatia, and New Zealand. He was born and raised in Texas. He is married with three children and loves to go camping and to go running.

"Basins of measures on inverse limit spaces for the induced homeomorphism," joint with J. Kennedy and D. Stockman, Ergodic Theory and Dynamical Systems 30 (2010) 1119--1130.

"A Classification of inverse limit spaces of tent maps with a non-recurrent critical point," joint with S. Stimac, Algebraic and Geometric Topology (2009), 1--34.