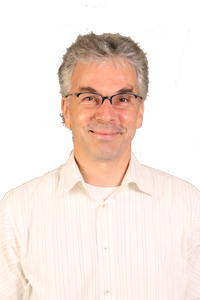 Biography:
Dr. Kirsten joined the Baylor faculty in January 2003. Prior to coming to Baylor he held research positions in Italy, Spain, Germany and England. After his Ph.D. he was a visiting professor at the University of Trento, Italy (1992-1993). He received an Alexander von Humboldt Fellowship to do research at the University of Barcelona, Spain (1993-1995). From there he was lured away with a Fellowship from the German Research Foundation (DFG) to go to the University of Leipzig, Germany (1995-1999). A Fellowship from the Engineering and Physical Sciences Research Council enabled him to spend time at the University of Manchester, England (1999-2001). Finally, before coming to Baylor, he was a post-doctoral Associate at the Max-Planck Institute for Mathematics in the Sciences in Leipzig. Dr. Kirsten is originally from Trier, Germany. He is married to Anja Moehring and he enjoys all kinds of sports, hiking, languages and spending time with friends.

Academic Interests and Research:
Dr. Kirsten's research is in mathematical physics. In particular, he is interested in spectral theory of partial differential operators, its applications in quantum field theory and its ramifications in differential geometry.

Teaching Interests:
Dr. Kirsten's teaching interests range from introductory calculus classes to specialized courses for Ph.D. students. He (together with P. Loya, University of Binghamton, NY) is in the process of writing a textbook on complex analysis and its applications.