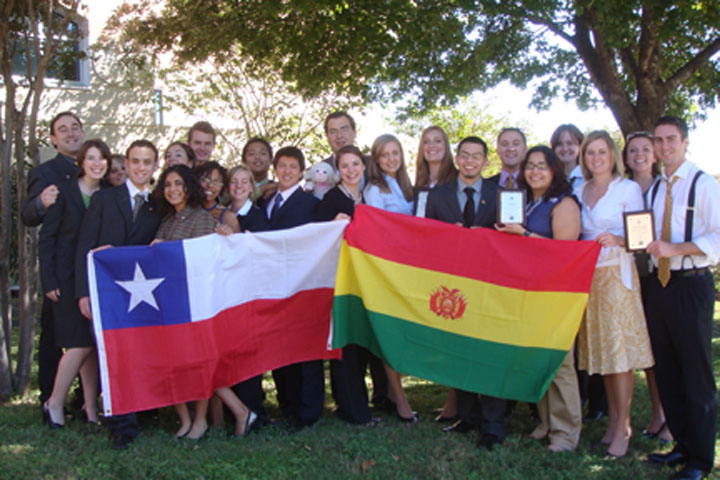 Baylor’s Model Organization of American States (MOAS) team won the Distinguished Delegation Award at the 12th Annual MOAS Conference hosted by St. Mary’s University in San Antonio, Texas, from November 6-8, 2008. This is the eleventh time Baylor has received one of the two team awards at the conference.

The conference was attended by 15 universities from Texas, New Mexico, Ohio, and three from Mexico. There were 24 countries represented. Students worked to resolve issues relating to the hemisphere that included multidimensional security, human trafficking, alleviation of poverty, and sustainable development. Baylor University represented Bolivia and Chile and the President of the Conference was Baylor’s own Joshua Hyles (graduate student in History, Mabank). The keynote address was delivered by Ambassador William Eaton, who served as the U.S. Ambassador to the Republic of Panama from 2001 to 2008 and who is now Ambassador in Residence at the University of Texas at Austin.

Other team members included Baylor Head Delegate for Chile Manny Muñoz (senior in Neuroscience, San Antonio), who was elected the President for next year’s conference, and Megan McNerney (senior in International Studies and Economics, Troy, OH), who was selected as the outstanding chair of the conference.

Additionally, Cassidy Ford (senior, University Scholars, Phoenix, AZ), served as the chair of the Inter-American Commission on Human Rights; and Brittney Quesada (freshman in Political Science, Missouri City), served as a rapporteur for the conference.