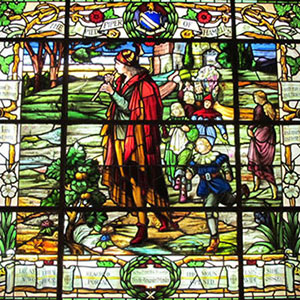 Forty-seven of the windows represent themes from Robert Browning's poetry, while eight are based on Elizabeth Barrett Browning's well-known Sonnets from the Portuguese, and four of the newest windows contain lines from both poets. These beautiful windows are featured on all three floors of the building.

Three striking cathedral windows in the McLean Foyer of Meditation, very different from the pictorial style throughout the rest of the building, transmit a feeling of sunrise or sunset as the shades of glass vary from deep amber to pale lavender.