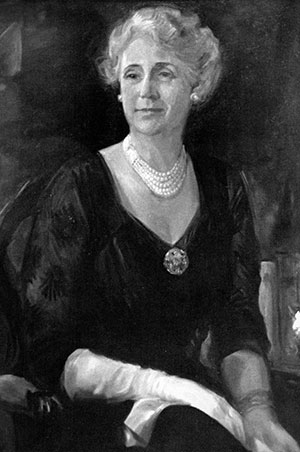 Mary Maxwell Armstrong, was born in Buena Vista, Texas, on September 21, 1882, the tenth child of Baptist minister Wilder Richard Maxwell. She received her Bachelor of Arts degree from Baylor University, did additional work at the University of Chicago the following summer, and taught English at East Texas Baptist Institute in Rusk, where her brother was president. There she met A. Joseph Armstrong, who taught there briefly in 1902 as he raised funds for his pursuit of a PhD. This chance meeting led to their marriage.

The Armstrongs shared an impressive dream, and they turned it into a reality by amassing the world's largest collection of Robert Browning and Elizabeth Barrett Browning letters, manuscripts, likenesses, and mementos AND by raising the funds to construct the building that houses them. Together they made twenty-nine trips to Europe as they conducted tours and searched for Browning materials. Together they hosted celebrities at Baylor University and in their home, placing the profits from these two venues into a "special account." 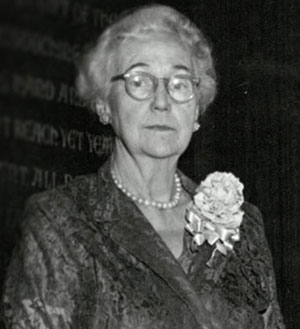 Through all the years of travel, adventure, entertainment, scholarship, collecting, and teaching, Mrs. Armstrong was more than a helper to Dr. Armstrong. Their life together has been referred to as a collaboration. Her abilities complemented his while her charm, insights, and understanding offset his gruff exterior. Many students who took the Browning course under "Dr. A" at Baylor remember that it was Mrs. Armstrong who always lectured on Sordello, Browning's notoriously difficult poem.

During the months when the library building was under construction and as her husband's health deteriorated, it became more and more Mrs. Armstrong's role to consult with the architects, designers, builders, and stained glass experts and to take the responsibility for countless decisions on major and minor points of practical and aesthetic significance. Her taste and judgment are manifest in innumerable details of colors, symbols, lighting, decoration, furnishings, and themes in the Library. Much of the beauty and elegance of the building is attributed to her influence and supervision—her expertise is particularly reflected in the Library's Elizabeth Barrett Browning Salon.

After her husband's death in 1954, Mary Armstrong assumed the directorship of the library, a post she held until 1959. Until her "official" retirement in 1966, Mrs. Armstrong maintained an office in the Library and served as director of the Guardian Angels, a patron group established many years before by her husband. She was also an active member of the Baylor Round Table, the Domestic Science Club of Waco, Daughters of the American Revolution, and an honorary member of the Waco Woman's Club and the Thursday Club. In 1966 she moved to West Chester, Pennsylvania, to live with her son and his family. She died there on September 1, 1971 and was buried beside her husband in Oakwood Cemetery, Waco, Texas.

For detailed dates of her life and times, see the Quick Facts page.