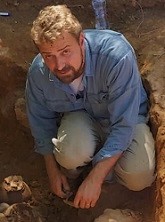 Davide Zori's research concentrates on the medieval world with research foci on the Viking expansion into the North Atlantic and the widespread 8th-12th century phenomenon of Italian population movements onto defended hilltops . He employs a multidisciplinary approach to the Middle Ages, combining material culture and written evidence. He conducts archaeological fieldwork in Iceland addressing the interaction of the Norse settlers with new environments, the construction of a migrant society, and the subsequent evolution of endemic political systems. As the director of the San Giuliano Archaeological Research Project, he has been leading excavations of an Etruscan necropolis and a medieval castle complex in central Italy. Since 2015 this project has been partnering with a series of international universities and incorporating Baylor students into interdisciplinary fieldwork and primary research.

Dr. Zori teaches in the Baylor Interdisciplinary Core and is affiliated faculty of the Department of History. He is currently open to taking graduate students through the History Department that have interests in the medieval archaeology, Vikings, and/or medieval Italy.