Understanding the onset of turbulence in charged media is one of the most fundamental challenges of modern science as it affects complex processes such as nuclear fusion, dispersion of chemicals in the atmosphere, formation of atmospheric storms, and aircraft stability. For example, flight turbulence is common, yet its origin can be affected by a number of factors, including wind flow, pressure or temperature gradients, and lightning enhancement in dusty atmospheres. In this project, CASPER scientists investigate the onset of turbulence in dusty plasmas, where both disorder and non-local interactions are present. Specifically, we are interested in the connection between anomalous diffusion at short time scales and the onset of time-evolved turbulence. This is a multi-disciplinary study conducted in collaboration between Baylor University, Texas Tech, and the University of Delaware, which aims to apply novel mathematical techniques to model anomalous particle diffusion in disordered media with non-local interactions. The research team has developed an in-house analysis code employing ideas from spectral theory and fractional calculus. For a given diffusion behavior and concentration of disorder, the analysis code determines the corresponding time-evolved dynamical state of the system based on the evolution of its energy spectrum. The predictions of this novel technique are compared against the results from molecular dynamics simulations as well as experiments employing dusty plasma liquids exhibiting turbulent behavior. 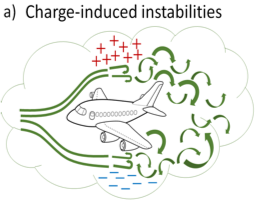 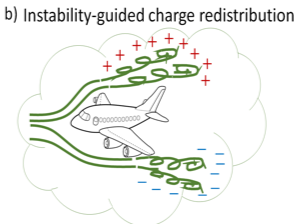 a) In the presence of charge, the resulting electric forces can induce instabilities.

b) The onset of fluid instabilities can, in turn, cause charge redistribution and alter the electric field.