Probing the Secrets of Asteroid Precursors

CASPER researchers Dr. Augusto Carballido, Dr. Lorin Matthews and Dr. Truell Hyde have been awarded a grant from the National Science Foundation to study what meteorites can teach us about the infancy of our solar system.

Four and a half billion years ago, the solar nebula – a swirling cloud of gas and dust around the newly-born sun – gave rise to planets, their satellites, and other objects. In order for this to occur, numerous rocks and pebbles fused together to form asteroid-sized bodies called planetesimals, the "bricks" that build planets.

Here on Earth, we have access to fragments of planetesimals in the form of meteorites. Certain types of meteorites, called chondrites, contain numerous inclusions known as chondrules, which are round granules that formed in the solar nebula. Many chondrules, which have diameters of one millimeter or less, are surrounded by thin envelopes composed of micrometer-sized dust particles. These fine-grained rims (FGRs) are crucial meteoritic components because they acted as a “glue” that enabled chondrules to stick together and, in this way, form the precursors of asteroids. But scientists are still not sure how FGRs aggregated around chondrules.

The CASPER team, in collaboration with Dr. Romy Hanna of The University of Texas at Austin, will decipher the history of FGRs. By combining state-of-the-art computer simulations and laboratory measurements of real chondrule rims, this work will untangle the different stages of FGR formation. Specifically, the simulations will mimic the accumulation of dust grains on chondrule surfaces, as well as the compaction that the resulting FGRs experienced due to collisions between aggregates of rimmed chondrules. The FGR structures obtained from the simulations will be compared to FGR structures from actual meteorite samples. These samples will be analyzed at UT-Austin using sophisticated instruments that allow probing FGRs down to microscopic scales. A direct comparison between the computational and laboratory results will inform researchers on the accuracy of FGR formation models.

As a result of this study, a key step in the assembly of our solar system will be uncovered, potentially helping us understand how other planetary systems came to be. 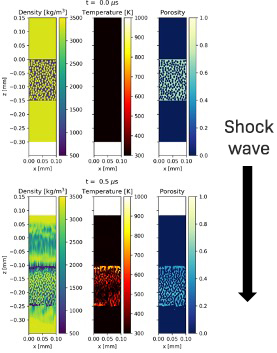