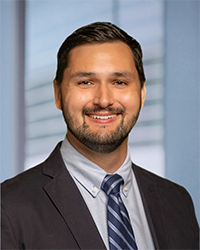 Dr. Saucedo achieved his MD at Baylor College of Medicine in Houston, Texas where his classmates named him “Most Likely to Make Your Day”.  Even as a student, he recognized the need to better understand the health care system and enrolled at the Jesse H. Jones School of Business at Rice University, where he earned a Masters of Business Administration.

Dr. James Saucedo completed his Orthopedic Surgery Residency in Chicago, Illinois at Northwestern University, where he was awarded the Brian Hartigan, MD Award for compassionate care, clinical excellence, and commitment to teaching.  He went on to complete his Hand and Microvascular Surgery Fellowship at the University of Washington and Harborview Medical Center in Seattle, Washington where he learned from Orthopedic and Plastic Surgeons to care for patients with conditions ranging from severe trauma at Harborview Medical Center to children with congenital hand differences at Seattle Children’s Hospital.

During residency, he worked with his mentors to develop a “Business of Orthopedics Lecture Series” that invited speakers to lecture on practice management topics often left out of traditional medical curricula. Based on the success of the program, Dr. Saucedo was later asked to help develop a similar series that could be distributed to other residency programs.

He practiced in San Antonio from 2014 to 2019 at The Hand Center of San Antonio and part-time at the Audie Murphy VA Hospital from 2016 to 2019, where he maintained a busy clinical practice and helped train residents and fellows.  He now lives in The Woodlands, Texas and practices at Houston Methodist in Willowbrook.  He remains involved with various medical organizations, including the Texas Orthopaedic Association where he serves on the Leadership Council, the American Society for Surgery of the Hand where he will soon transition from co-chairing the Business of Hand Surgery Committee to serving as Practice Division Director.  He is proud to work alongside other ASSH members on a major practice management education initiative called Hand.p that will serve as a comprehensive resource for other ASSH members.

He loves teaching and presenting in various settings, and he enjoys spending his free time with his family, listening to music and roasting coffee.