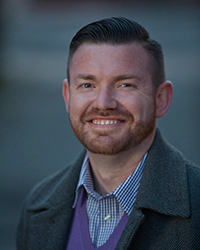 John-Paul C. Hayworth is the Executive Director of the DC State Board of Education. He joined the State Board in 2015 after serving in two mayoral administrations and on Capitol Hill, including as an advisor on federal, congressional and local affairs specializing in education, economic development and budget issues. He also represents the District of Columbia on the US Department of Education Mid-Atlantic Regional Advisory Committee and as President of the National Council of State Board of Education Executives (NCSBEE). He is the State Board’s designee on the DC Community Schools Advisory Committee and was appointed as the chair of the committee in September 2019.

Mr. Hayworth serves as the appointed agency head for the elected State Board. He is responsible for day-to-day operations of the agency as well as leading policy development and research on topics under the State Board’s purview.  Mr. Hayworth has been an invited speaker at national conferences and other events, including providing the 2018 Baylor Interdisciplinary Core Alumni Homecoming Lecture entitled “The Role of Failure as Part of the Examined Life”. He was awarded the 2019 Outstanding Young Alumni Award by the Baylor Line Foundation.

Mr. Hayworth is a dedicated resident of the District of Columbia and was an elected Advisory Neighborhood Commissioner for Single Member District 4C07. He moved to the Washington Metropolitan area permanently in 2003 after earning his BA from Baylor University and a MA from the University of Connecticut.

Hayworth has been involved in helping local government find solutions since he was appointed to a student position on the school board in his hometown of Olathe, Kansas.